Ok, anyone knows already that Bologna, the capital of Emilia Romagna region, is renowned as being La Grasa – for its amazing and tasty food, La Dotta – for the old university, which was founded in 1080 and La Rossa – for the red rooftops that you can see from the Asinelli Tower. To be honest, we consider that La Rossa is the most suitable nickname for Bologna 🙂 Not due to the rooftops, but to the amazing red cars they have! We’re pretty sure that you always imagined yourself driving one of the “red beasts” on the gorgeous roads of Italy. Well what do you know… you can do this close to Bologna (at 50km away), in the lovely city of Modena.

So if you’re a car enthusiast and you simply love pressing that gas pedal, Autodromo di Modena is definitely the place for you! It comes as no surprise for anyone that we were eager to try the red Ferrari F430 Challenge on the Modena circuit. Who isn’t? 😀 And it was so much better than expected! It truly surpassed all our expectations! 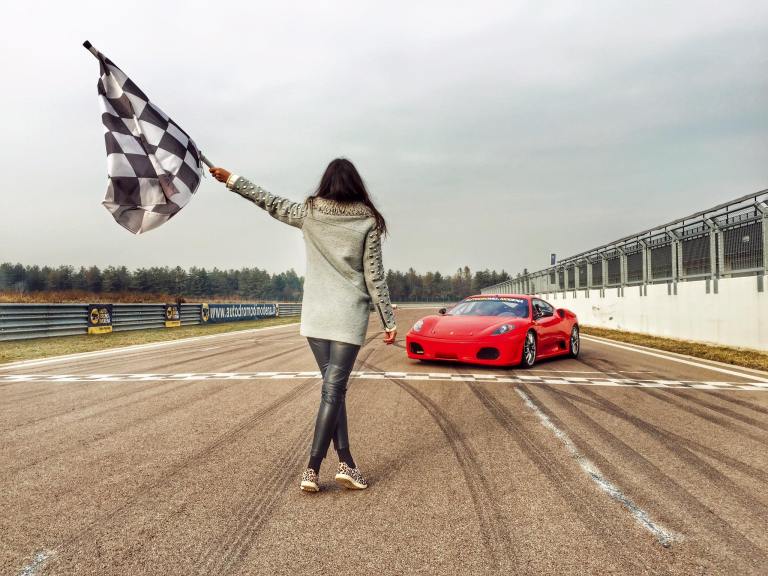 Just as a fun fact, the entrance of Pietro, our driver, was simply fabulous 🙂 We were at the front desk of the reception announcing our arrival, and the receptionist just phoned Pietro to inform him to meet us in he lobby. As there was nobody else in building, nor in the parking, we thought that it will take some time until he will arrive, so we ordered some cappuccinos. By the time we were sipping the creamy foam, we heard THAT noise and felt the floor trembling under our feet. The mugs started to shake on their small platters and the coffee was dripping out of them. We looked behind us, through the glass wall. The Red Challenge was there. We heard a violent break and a lot of wheel spin. Then Pietro got out of the car, removed his helmet and came to us. “Good morning guys!” he said. But we were so mesmerized that we couldn’t find our words to politely respond to him 🙂 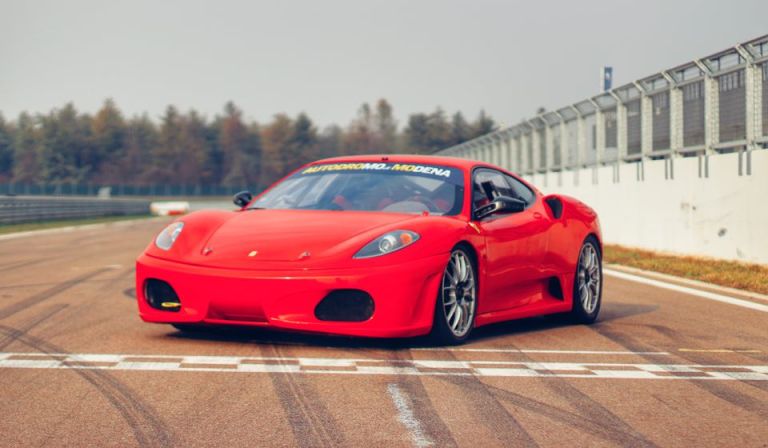 But hey, wake up! 🙂 Ferrari Challenge was waiting for us. Short briefing about the car, about its power (510 horse power geeeez!), instructions on how to get into the car (is not as easy as it seems!) and we were ready! Helmet on and let’s hit the road, Jack! It was such an amazing experience! Pietro is a very experienced driver who can show you exactly what the car is really capable of! Right from the start you could feel the constant and powerful acceleration and hear the beautiful roar of the engine which was just behind our seats. The car was so low that you felt like you were sitting directly on the tarmac. The Recaro seats were unbelievable and the entire feeling in the car was awesome! Besides the fantastic acceleration, not like anything we’ve experienced so far, we were amazed by how that car brakes. It brakes as if you hit a wall 🙂 Your eyes pop out when a corner is close and you have to slow from 200+ km/h 🙂 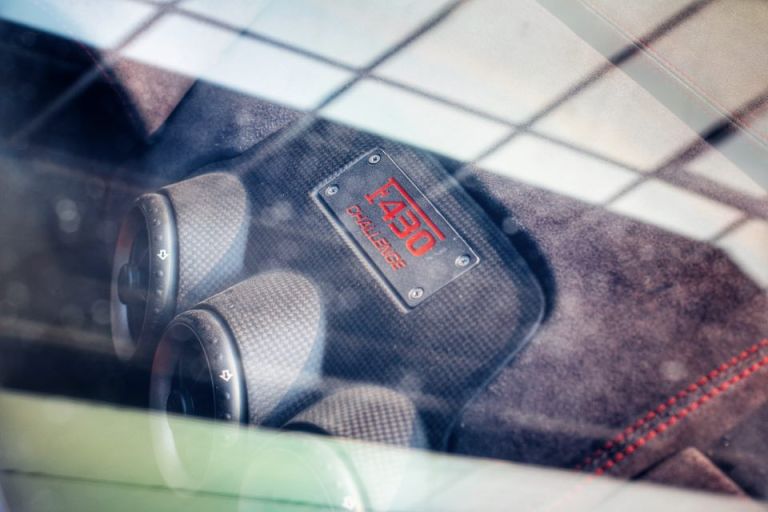 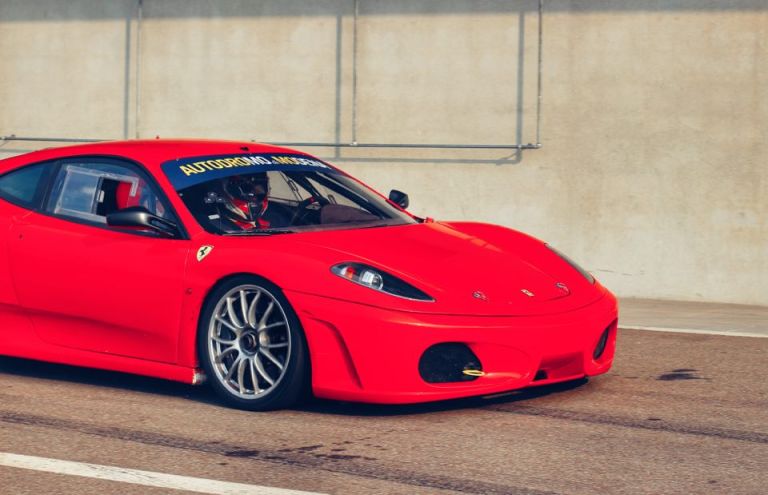 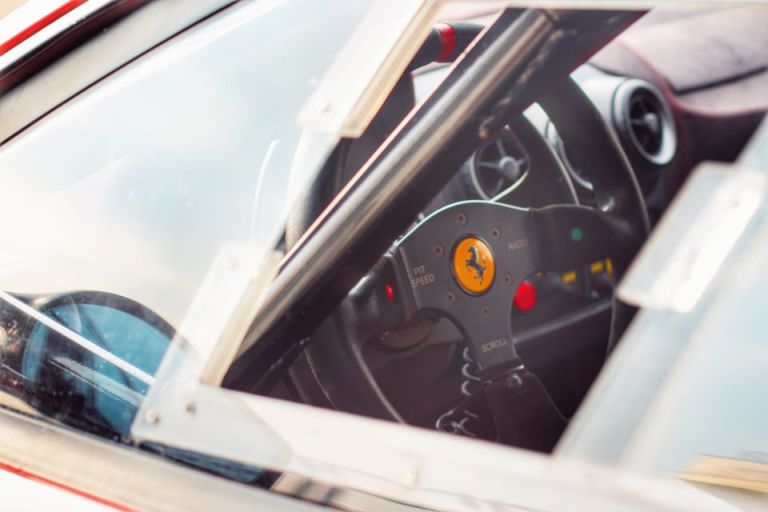 Then there is the cornering. It’s like the car is running on train tracks. So stable and clean through the corners and the curves could be attacked easily at speeds of around 100 km/h. The grip was absolutely stunning! After two laps, of course I wanted more 🙂 As a fun fact, just before the actual laps with Pietro, to make sure that he would show me the true potential of the car, he took the car for two laps just to heat up the tires for even more grip around the track! The car runs on huge 300/R19 slick tires. At the end of the two laps, the front brakes were smoking. Literally! We even had “fans” cheering us from the balconies after the two laps and they all wanted to come close to the car and take pictures with it. We were lucky that it was a quiet day at the track and we had all the time to ourselves to take photos of the car, arrange the car on the starting grid and just enjoy the beautiful red of the F430 Challenge together with the beautiful friends at Autodromo di Modena ! Just before we left, Pietro took out another small surprise for us to enjoy and take photos: the KTM X-Bow! “Only” 290 hp this time, but a fantastic looking car in which you have to take the steering wheel out to get out of the car, just like you do in Formula 1 cars. The KTM X-Bow has a modified 2.0 Audi TFSI engine, producing 290 hp and has weighs just over 700 kg, so you can almost call it a Kart 🙂 And because there is no windshield you feel a lot more the acceleration on the track. 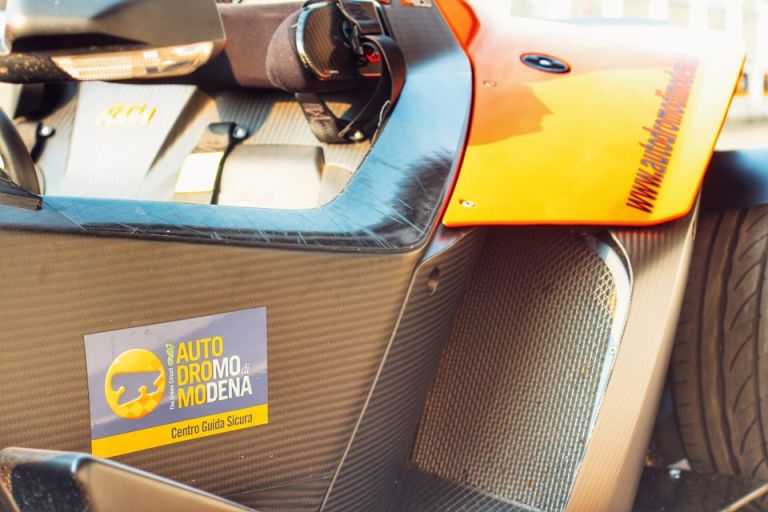 So either in a Ferrari F430 Challenge or in a KTM X-bow, feeling all that speed, all that engine noise, being there on the circuit and driving in one of the most craved cars in the world was a fantastic feeling! We truly recommend the circuit from Autodromo di Modena where you can drive these cars and you can also go and have fun with your own car on the track! Find more details about them and the circuits they offer on their official website.

It is truly a bucket list item that you have to try at least once in your lifetime!